If you use a street bike or mountain bike for exercise or transportation, you’re probably interested in tracking things like speed or distance traveled. This is easy to do with a bicycle computer. There are a lot of cycling computers available, but the most basic ones usually are a cycling odometer or cycling speedometer (or both).

The bike computers on this list are budget options, which are a lot cheaper than many of the high-end cycling computers. Often the reason they’re so affordable is because they only offer basic features and exclude things like cadence or GPS. If you’re a casual biker or only use your bike to commute, these wireless bike computers should meet your needs.

If you’re more interested in tracking your fitness activity in addition to biking distance and speed, check out the best fitness trackers for cycling.

This is one of the best cycling computers available for people looking for a cheap bike computer. At the time of this writing, it is the #1 bestselling bicycle computer on Amazon. This computer functions as both a speedometer and an odometer, with all the needed accessories and sensors for a wireless set up. It’s easy to use and perfect for casual bikers and regular riders.

The large numbers and the backlight mean you can read your stats easily, day or night. The LCD display means you can read it even in bright sunlight (unlike smartphones and other touch screens). The SY is also waterproof so you can easily take it off road or ride in the rain. 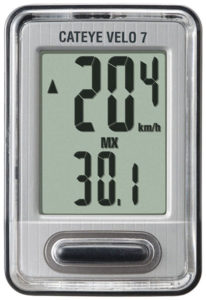 This model from Cateye is perfect for casual riders or if you’re looking for an affordable cycle computer for casual riding or to hook up to a spin bike or stationary bicycle at home. Thie Velo 7 is a wired computer, which some cyclists don’t like. Generally the wired bike computers are easier to program and more reliable with their measurements. If you’re planning to use it for a stationary bike, it shouldn’t make a difference.

The Velo 7 is a cycling speedometer, recording current speed and calculating average speed and max speed. It also works as a cycling odometer, recording the trip distance and tracking your total distance. This is a great option for people who aren’t very tech savvy. The one button operation makes it easy to switch between modes. The tool free installation and a universal bracket that can attach to the stem or the handlebar make setting it up a snap.

The Outdoormaster cycling computer is another budget option that offers extra features some riders will love. In addition to the normal speedometer and odometer functions, this road bike computer displays the current temperature and also the time (12 hour or 24 hour format) and has a low battery indicator so it won’t suddenly die on you.

This bicycle computer is waterproof so it’s perfect for road bikes or mountain bikes and great for serious cyclists. The backlight means you can use it day or night without issue. Since this is a wireless bicycle computer, you won’t need to worry about any extra wires getting in the way or interferring with your bike riding. 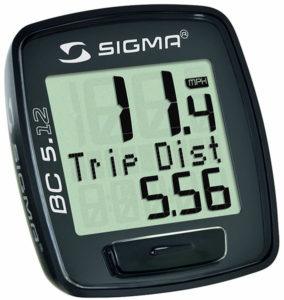 The aim of the Sigma Sport is to be an easy to use, classic bike computer through simplicity. It has straightforward one button operations and is straight forward and simple to install. It easily attaches and detaches from its mount. With five functions (including speed and distance recording), this computer for cyclists is a great basic and affordable option.

One feature this budget cycling computer has that the other cheap options miss is the ability to download your stats to your computer so you can keep track of them long term. The Sigma Sport is also waterproof, which makes it a better choice than the Velo 7 if you want it for a road bicycle or mountain bike. 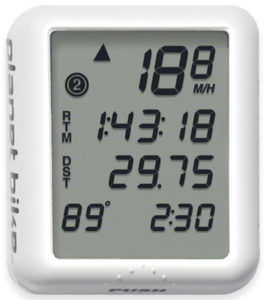 If you’re in the market for a simple bicycle computer that’s still affordable but has more options than the basics, Protege from Planet Bike is a great option. It has 9 functions and is available in 2 colors to choose from as either a wireless or wired version. The biggest feature most bikers will enjoy is that it has a four line display, meaning you can get all your stats with one glance instead of needing to press a button to cycle through them. It also has time display and temperature available at a glance.

This bicycle computer works as a speedometer and a dual odometer (for two wheel sizes). It displays your current speed, the ride time, and ride distance in one glance, and can also calculate your average speed. The Protege 9.0 is weatherproof and is a great option for mountain bikes, road bikes, or indoor stationary bikes with front wheels.

What is a bike computer?

Computers for cyclists go by many names, including bicycle computer, cycling computer, or even cyclocomputer. The exact functions vary depending on the model, but the most basic bike computers function as a speedometer and an odometer.

Speedometers measure the bike’s speed. Many bike computers will track not only the current speed but will also give you speed averages and the maximum speed hit turning a trip.

If you buy a more advanced bike computer it may have features like time display, backlighting for night riding, cadence sensors, heart rate, power output, GPS tracking, or the ability to upload your stats to a computer or smartphone for advanced tracking.

Cycling computers are considered essential technology for people who bike for fitness or commute primarily using a street bike. Casual bikers also enjoy them because they like to see stats of their rides and their progress.

People who only use cycling as one form of exercise may be more interested in using a cycling activity tracker that can track all forms of fitness like steps, swimming, running, etc.

How do cycling computers work?

Basic cycling computers (like the ones that function as odometers and speedometers) usually come with a display that attaches to the handlebars of the bike and a sensor that attaches to the front wheel. The bicycle computer will either be wired (which means it will be more accurate and consistent though you’ll have to deal with a cumbersome wire) or wireless (which makes riding your bike with the computer attached easier, but set-up can be more difficult and the computer’s readings may not be as accurate. 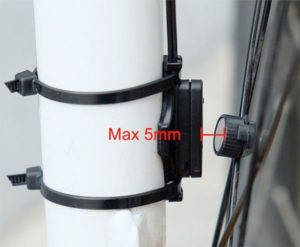 A non-GPS bike computer used magnetic sensors to record speed and distance information. A magnet is attached to the wheel spoke and a sensor is attached to the front fork. The sensor measures every time the magnet passes it to compute speed and distance. In order to record accurate statistics, you will have to set up the cycling computer with information about your bike, including wheel size.

Most bike speedometers come with mounting brackets that are easy to install and will not require tools. Some may require the use of a screwdriver to install the mount. Generally, they are simple to install and setup for most tech savvy people.

Find the best phone mounts for cycling to use your smartphone for tracking and navigation.